Sony is slowly making its name in the Wireless Earbuds department. The company manufactures commendable wireless earbuds at a fair price for the majority of the consumers. They always pay attention to the materials they use and the features their earbuds bring to the table.

The Sony WF-1000MX4 wireless earbuds are responsible for paving the way for the brand. Encouraging the company with positive feedback in the market led to the creation of the Sony WF-C500. But this time, the price is slightly higher than their past earbuds, including the Sony WF-1000MX4. Now everyone’s wondering if this could affect their already good performance. Will this increase their sales, or will this be a total flop?

That said, let’s see the features, price, sound quality, and many other things the Sony WF-C500 has to offer. Whether it’s worth the price is for you to decide. 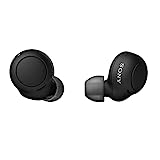 The Sony WF-C500 has a bean shape and doesn’t have anything ‘dangling’ when placed in the ear. It looks more like a cover for the ear canal–which makes it convenient to use, especially when you’re lying down or leaning your back against the wall. Each earbud weighs at least 5.4g, which is fairly light, suitable for its design. Not only that, but the Sony WF-C500 wireless earbuds come in four colors: black, white, green, and orange. Of course, the availability of the green and orange colors solely depends on the shop you go to.

The wireless earbuds have a compact and comfortable design to the point that you might even forget you have them on. The case of the earbuds is also simple in an oval shape. It somehow resembles a capsule but, of course, a bit bigger than actual capsules for the earbuds to fit in.

Sony WF-C500 has 5.0 Bluetooth connectivity, just like its cousin, the Sony WF-1000MX4. It promises a fairly smooth pairing process and 30ft of maximum distance between the earbuds and the device. Such seamlessness oblates any worry regarding your freedom to move around. You can even leave your phone charging while using the earbuds as you do your daily chores.

What’s commendable about these earbuds is the fact that the battery life is quite long. Compared to the Sony WF-1000MX4 with 8 hours of battery life, the Sony WF-C500 can survive up to 10 hours of moderate use. And to add to its life, the earbuds’ case houses another 10 hours. While it doesn’t come close to Cambridge’s Melomania 1 Plus, it’s still quite a big number of hours for wireless earbuds, especially when you’re traveling or taking leisure walks. Besides, when it does happen that the earbuds’ battery life drains earlier than you anticipated, then you’ll be surprised to know that if you charge the earbuds for just 10 minutes, it’ll give you an hour of playtime.

The Sony WF-C500 has a water-resistant level of IPX4, making it strong and durable against sprinkles of water or trickles of sweat. The IPX4 lets you do your usual exercise routine or gives you ample time to run to a shade when it rains.

Another wonderful feature of these earbuds is the ability to adjust the EQ settings to your preferences. Rather than a voice command, you can push the button on either side of your earbuds to click the AIs awake. These buttons also serve as play/pause, next/rewind, volume up/down, and end/answer phone calls. You can also have Siri or Google as your assistants, but they won’t work with a simple voice command–because that is a feature the earbuds don’t have.

Sony WF-1000MX4 has quite the rich bass whether the volume is up or down. Sony WF-C500, on the other hand, needs a little bit of time for you to appreciate what it can do. During the first few hours or days, you won’t find anything remarkable about the quality, but as days go on, you’ll slowly realize that everything is well-balanced.

From the thick thump of bass to the soft rumble of treble, Sony WF-C500 is not your typical loud and domineering earbuds. It stays simple and humble enough to deserve appreciation. Of course, we don’t recommend these earbuds to those who prefer deep bass in their music. Sony WF-C500 shows good control over that, playing it all safely. Although the bass isn’t as thick as other popular earbuds, both the texture and the timbre are well-balanced to the point of sounding good. But then again, we don’t recommend these earbuds to those who deeply value hearing and feeling the rich bass.

Keeping in mind the sound quality and the other features that the earbuds bring to the table, purchasing them for $79 on Amazon won’t be too much for your wallet. Although, if you currently live in Australia, the price is a lot different and higher, sitting at $149.

There are so many things to consider when buying your earbuds. It is important to keep in mind why you want to buy one–yes, the purpose for purchasing wireless earbuds is mandatory. The reason for buying one helps you look for that specific feature that other wireless earbuds might not possess.

The Sony WF-C500, again, has 5.0 Bluetooth connectivity, can command Siri/Google with a push of a button, and has quite a convenient design. The IPX4 water resistance helps keep it safe from daily activities, especially for sports enthusiasts. Answering calls with the earbuds isn’t a problem, especially with its mic, either, because both parties can hear one another.

And the best feature of these wireless earbuds is the extremely long battery life–which is a total of 10 hours. So if you’re a consumer who likes convenience and isn’t too picky about the bass and Siri/Google and whatnot, then the Sony WF-C500 is for you.

Join our subscription list to get updates and news straight to your email. For those wanting to know more about our latest products, use this form to get notifications.